Do you seek adventure? Have you watched a professional surfer catch a huge wave? Did you hear about your friends riding dune boarding on vacation? Australia is a beautiful place to live and vacation. The beautiful weather paired with an action sport will make for a great vacation day or an escape from the daily work grind. You do not have to be a pro athlete or have any experience to try a new sport. Many action sports companies offer lessons and guided adventures.

A hydrofoil is a fin with wings that extends below the water. It replaces the fins on a surfboard and allows the rider to move at varying speeds. A hydrofoil is designed to lift the board out of the water. The rider appears to be floating in the air while riding their foil board through the water. The design was originally used in windsurfing, bodyboarding, wakeboarding, and surfing. Although only a few pro boarders attempted to use foil boarding, it now is a popular sport. You can buy a foil board at extreme sports shops. They may also offer foil-boarding lessons.

Surf with a Kite

Before foil boarding, kitesurfing grew in popularity and remains popular today. A surfer will use a kite to capture the power of the wind and surf through open waters. You will see people standing on their boards, holding onto their kites while coasting through rivers, lakes, and oceans. They can harness the power of the wind by using a large parachute-type kite. The parachute-type kite is much larger than most kites you would fly as a hobby. The material is extremely durable and includes a wide variety of shapes such as bow and C-shaped kites. You can hold onto the kite while you jump out of the water to catch air or do a flip.

Previous Is there any risk involved with watching live sports online?
Next Live Sports Streaming and Broadcasting 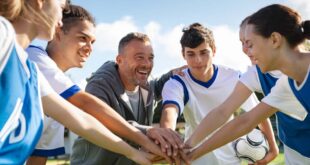 How To Become A Sports Psychologist

What are the odds of winning with free college football picks?

Whether you’re a rookie trader or a seasoned veteran, you know that the stock market …